While June was sitting in the lobby, I noticed her face is differently-colored.  Her aura is as translucent as the light bulb behind her.

Well, the monitor of the lobby camera is hidden in my station— I see everyone and anybody who sets foot in the Kingdom.  Two months ago, there were two bull-necked belligerent guys in my lobby as early as 5AM…I called the cops on them.

When June was in the treatment area, I called her attention and told her how refreshing it is to see her smile like she’s still playing with her bubble bath— frothy and fizzy!

“Oh yes!  I was in the tub with the running water for 30 minutes!” she replied.

Her CVC was removed recently… after one long year!  She said when she was in the hospital for the removal procedure, she told the Surgeon “it’s about time, it’s been a year”. 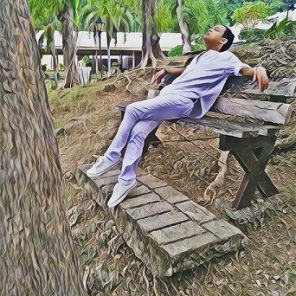 She was not mad, in fact she was happy in her mind— “finally I can take a long shower”.

So June, tell me, what will you do under the water with your man???